you are here: home » users » the king's school

When the Heritage Library Management System was first released, way back in the early 1990’s it very soon became popular with school libraries. Clear, uncluttered screens and ease of use satisfied the needs of school librarians who were looking for an automated system that would make their lives easier without the need for an IT background or extensive training.

Heritage has remained popular with schools since then by providing the latest in library software technology. Over twenty years of support and development have ensured that Heritage continues to satisfy the demands of a busy school library, whilst also offering additional functionality that will raise its profile, such as Heritage Online and current awareness facilities.

Value for money is also a crucial consideration when automating a school library. Incredibly, the price of Heritage has not risen since its initial release!

Our featured library at King’s School was established in the 15th Century during the reign of Henry VIII. As part of the Eton group of schools it has a fine reputation for high levels of academic achievement and former alumni include Sir Hugh Walpole, Christopher Marlowe and William Somerset Maugham. 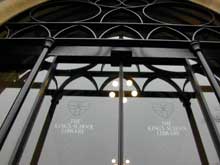 Set in the ancient surrounds of the Cathedral precincts and St. Augustine’s Abbey, King’s has continued to build upon the traditions of its historic location. From its foundation back in 598 AD St. Augustine’s emerged as a centre of learning, housing the monks sent from Rome for the conversion of the Anglo-Saxons. As the home of English Christianity, the Abbey provided a gateway for much of the Roman Catholic literature that came into England. Although many of these ancient volumes disappeared with the dissolution of the monasteries in 1538, King’s School library still holds a number of medieval books in a collection that spans over 500 years.

1993 saw a major re-evaluation of the library’s role within the school following its move from the main precinct tens year earlier. This included appointing a new librarian, Kay Hoar, whose primary task was to automate a library that had existed for many years without any form of recognised classification. The stock itself was a collection of around 25,000 books and other media which included videocassettes, CD-ROMS and a small number of journals.

Kay had no previous experience with automated library systems so had to start from scratch. Having the luxury of time on her side meant that there was no immediate pressure, although, as Kay reflects, choosing the right system was very important.

“ The King’s School aims and achieves high standards in all areas, so therefore I was conscious that I must make the right decision in choosing their Library Management system. They expect the best, and are willing to pay well for what they need, but the product has to be good! This, Heritage has proved to be.”

Kay’s first step was to consult the other schools affiliated to the Eton group, although it appeared that King’s were the first to embark on such a project. The next step was to make enquiries and get some feedback from other librarians, as it is often those who are using the system who can provide a more balanced view. IS Oxford has always encouraged potential customers to speak to existing users, not only to endorse the product, but to provide an insight into the company itself. A full list of Heritage users is available to all prospective customers without convenient omissions or emphasised ‘friendly’ sites. 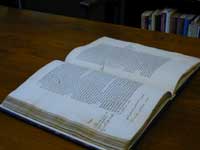 “It’s always difficult before you’ve seen a system to know where problems may or may not arise…. existing users were saying ‘the after-sale service is brilliant’... and that was important ”

An on-site demonstration of Heritage followed, providing a general overview of the system and all the available modules. A visit by one of our sales team enabled Kay and her IT staff to ask questions regarding the implications of implementing a Library Management System.

Apart from cost, the main consideration when purchasing a Library Management System must be functionality: Can it do what we want it to, yet be simple enough to use and administer? Heritage soon emerged as the obvious choice; offering a highly developed and sophisticated system that was nevertheless simple to use. Kay was extremely impressed with its clear and stylish interface in the enquiry menu, and found the catalogue record to be logical and straightforward.

Following the installation of Heritage, Kay recruited a number of teachers to help with the cataloguing process, not all of whom were qualified librarians. Kay’s solution was to provide a slip of paper for each item showing the keywords that needed to be entered by the willing recruits. 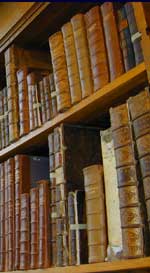 qualified librarian. It is all too tempting for schools to employ temporary data entry staff specifically to catalogue the whole library stock, resulting in errors and inconsistency in the data which the librarian has to revisit and correct at a later date.

Heritage was up and running by January 1994, with most of King’s 25,000 items available for issue. The library is open 85 hours a week (including evenings and weekends) and Heritage is fully operational in Kay’s absence. As well her two assistants, Liz Thane and John Smith, Kay enlists the help of local PhD students to perform basic circulation tasks. House librarians also issue items to students when Kay is not available.

With such a variety of staff Kay makes use of the Heritage password security system whereby users can be assigned certain privilege levels. This means that Kay can provide her assistants with the ability to issue and return items but prevent access areas of the system they are not authorised to use.

After many years with Heritage, Kay’s primary interaction with IS Oxford is with the support desk. As Head Librarian, Kay appreciates the importance of having technical support staff that she can rely on.

“You’re not buying what is available at the time, you’re buying the help to get it working”.

For many years IS Oxford has worked hard to maintain the very highest standards in customer support. Our users appreciate the fact that they are familiar with individual technical support staff members. This, coupled with our call-logging system, provides a continuity that avoids having to explain the same problems to a number of different people. Having direct contact with support staff over the telephone helps to develop a relationship between the customers and the support desk.

“The telephone support is excellent…you are always made to feel that yours is never a trivial problem to their staff, which is quite important in giving you confidence”

With experience Kay has realised the importance of group forums. The annual user group (HUG) meetings provide a unique opportunity for users to meet the IS Oxford developers to voice opinions and ideas about the software, and see the latest developments.

To supplement these national events Kay has formed her own local user group for school librarians in the Kent region. These smaller, more focused meetings allow the schools to discuss the various aspects of Heritage in more detail. A valuable by-product of this group is an informal support network where ideas are shared and questions answered.

The smooth implementation of Heritage into King’s School is a success story that has positioned the library at the centre of school life. Heritage has helped to bridge the gap between the geographically isolated St. Augustine site and the main school precinct. 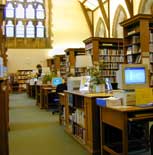 Students are now aware of the resources available to them, and have confidence that they will find what they’re looking for. The library is busier and is being used by lots of different people. Statistics generated from the Heritage reports facility show a significant increase in the number of books being borrowed. These reports have also given Kay a valuable insight into the range of books that students are choosing, which has increased term by term.

Management information is invaluable to King’s School when planning the acquisition of new resources. It also assists the Headteacher in making decisions on areas which might need to be promoted.

“Heritage has been a good image for the school…because of the nature of the school, and the heavy pressure everyone’s under, I think an efficient library service enables staff and students to achieve their high academic successes. I think Heritage has lived up to that mark. It is an efficient system.”

In March 2008, at the recommendation of the School IT department, King's School notified us that they would be leaving Heritage and would instead install Eclipse. After using Eclipse for a week or so they reversed their decision and came back to Heritage. A couple of years on, we contacted Sarah again to ask how she now feels about Heritage.

What are your favourite features in Heritage?
We really appreciate the security of data, knowing that it is on our server and not elsewhere. I like the enquiry screens now as are attractive and reflect more what pupils expect to see on webpages ie images, links to other pages, reviews ... Also popular with staff here is the ability to design and run reports which access data.
How have you found the support service from IS Oxford staff?
Over the last few years there has been immediate support response. IS Oxford seem to have greatly improved on this aspect of their service.
Have you used the support website? How useful did you find it?
We have used the support service to print off help sheets which are very useful.
Do you have any other comments you would like to make about IS Oxford or Heritage? Would you recommend it/us to other libraries?
Yes definitely ... but there again I am only familiar with Heritage ... and the other management system we almost introduced!

See https://cirqasupport.com/coronavirus for the latest information.

We all had £200 each to donate to charity. What did we choose?

END_OF_DOCUMENT_TOKEN_TO_BE_REPLACED

Read all our news...